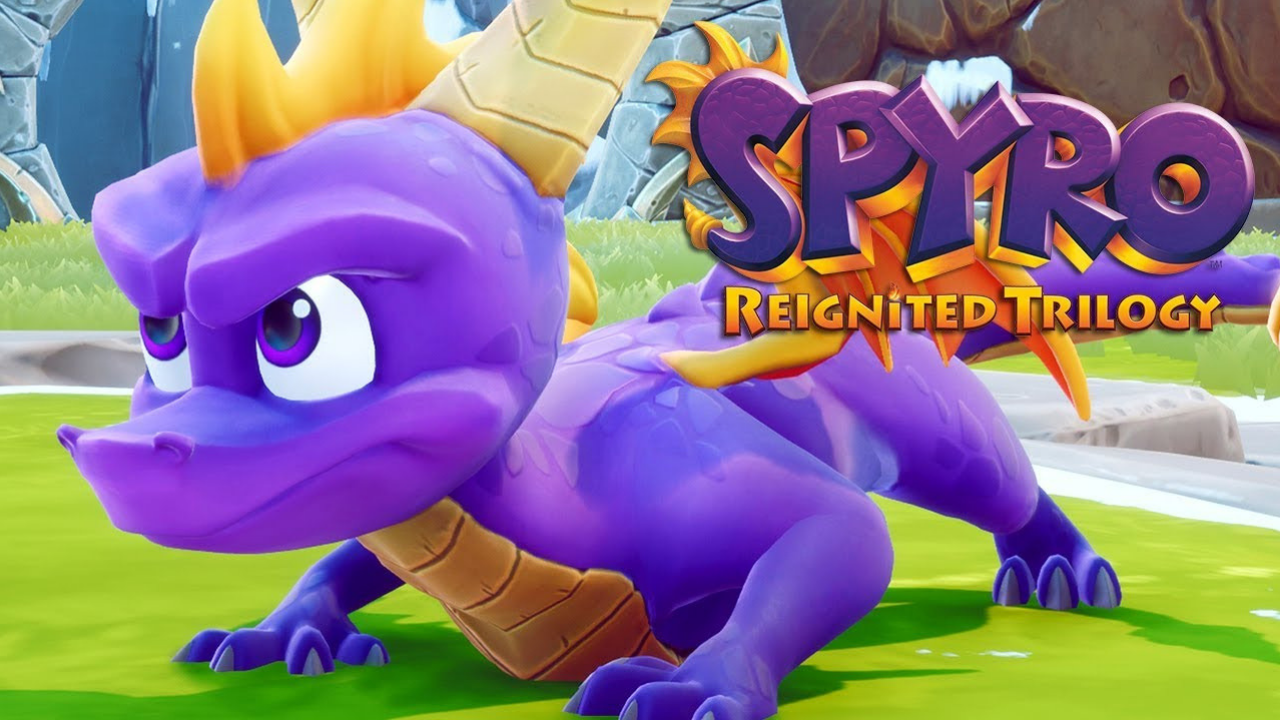 Available now on PS4 & Xbox One.

Developer Toys For Bob has resurrected another gaming classic and it’s one I’m super excited to be playing again!!

First things first this isn’t just the three Spyro games with a new coat of paint! The games have been totally remade and as soon as the first cut-scene shows it’s clear to see with beautiful new graphics and great voice acting standing out straight away! Spyro has also been a game that I fondly remember playing non stop when I was a kid, so when I hear a classic game like Spyro is being remade I’m always nervous that it won’t be as good as I remember in turn leaving me feeling let down, however I’m really happy to say the Reignited Trilogy has backed up what I always thought as a kid, Spyro was and still is one of my favourite games of all time and I’m so pleased the game has been remade and who knows maybe Spyro can carry on his adventure in the future!

After the Success of Crash Bandicoot N Sane Trilogy retro fans are really getting treated with the arrival of Spyro and it’s great to see classics like this being remade and even more so being on multiple platforms! Who ever thought we would see Crash or Spyro on an Xbox!?! I am happy this is the case though as they are both games that I think the whole gaming community should experience which ever side of the console fence you are on! I played through all three of the Spyro games when I young but even though the gameplay and levels are the same everything still feels new and fresh as remembering all the levels and their secrets from all them years ago is highly unlikely.

The three games included in the Spyro Trilogy are: Spyro The Dragon, Spyro 2: Ripto’s Rage! and Spyro: Year Of The Dragon.

The three expansions can be played in any order but for the full Spyro nostalgia experience I’m sure most players will play them in order!  Once you get started the improvements are clear to see, the levels are colourful and vibrant and absolutely full with life and stuff to do. The detail in the remake is impressive, Spyro only has two main attacks, fire and charging both of which are very effective! When breathing fire Spyro will torch his enemies and also will burn up the grass or trees around him with it, charging will however sometimes need to be used on certain enemies as they maybe carrying a shield that will stop the fire and the only way to take them down will be with the charge attack. Charging in Spyro really gives a give crash as you smash through things and showcases the power of this little dragon, there’s nothing better than burning down a little tent that an enemy is hiding in to then leave him standing there shaking his butt at you only for you to charge at them! (My son thought it was hilarious!)

The levels are set out the same as the original games and gems are scattered throughout the levels for you to collect, these are a passage through the game so collecting them is essential to progressing. In the first game you will need to free your trapped dragon friends and each one has it’s own little story that is voice told to you sometimes giving hints and tips about the game once you have managed to free them, freeing a certain amount will allow Spyro access to a hot air balloon which in turn takes him to the next world. The game doesn’t really guide the player throughout the whole experience in all honesty so remembering where things are is something you will have to get used as the guidebook that’s on offer only shows your progress rather than any help on what to do next.

In Spyro 2 gems are also important to progression but in this time granting Spyro new abilities, not only can Spyro now swim upon meeting Moneybags for a small price he will now be able to swim under water! Moneybags will pop up through the game, obviously asking for more and more money but in giving it to him he will open more passageways, bridges as well as granting as mentioned before new abilities so collecting as many gems as possible is more than worth it!

HP are shown through your dragonfly companion called Sparx, his colour will indicate how much health Spyro has. To increase health Spyro will need to take out things like sheep, frogs or other animals which in turn will release a butterfly that Sparx will chase and eventually eat, from here he will change colour giving Spyro one more hit point.

The controls are something that fells like it has had a nice upgrade, the camera can be moved around with the right analogue stick or put right behind Spyro by pressing the left trigger which makes the camera positioning feel much improved, there is also the option of an active camera being enabled which will follow Spyro. I did find swimming underwater a little frustrating at times with the camera being the main problem but on the surface everything works fine! Spyro also makes better use of the bumpers and triggers now too, the bumpers will enable Spyro to roll either way which is a great way to dodge enemy fire but Spyro’s flame ability is now on the right trigger which feels much more natural but if you do prefer the nostalgia and fancy swapping the controls back to the original from all them years ago the option is there to do so.

Something that may infuriate some will be the games difficulty spike, it’s very up and down to say the least but I personally loved the challenge and for the most part the game felt far easier than I remembered it to be but then there is the boss battles which really do pose a considerable challenge! Most small enemies will only take one hit to defeat and this is the same for some of the larger ones but the bosses take a considerable amount of damage before defeat. Some of the games main bosses are an absolute nightmare to take down but I did feel I really achieved something when I managed it. There are also bonus levels where gems and bonuses can be earned, some of these are fairly straight forward but others will most likely leave players feeling majorly frustrated due to the precision needed to make it through all the hoops and hitting all of the chests without even missing one. All in all the difficulty won’t be for everyone and some will end up frustrated but completing one of my childhood favourite games makes it worthwhile!

The game does have the odd bug like things not appearing, enemies riding round on invisible trains on one of the flying levels which is pretty frustrating when you are hitting a train you can’t even see!

Once the Nostalgia does wear off there can be a feeling of repetitiveness though sadly, collecting things like eggs constantly can wear thin but if you want 100% completion it’s something you will need to do, as of yet though I personally have constantly found myself sitting up playing the game far later than I normally would which says alot! I will get that 100% completion!! The game does have the odd bug like things not appearing, enemies riding round on invisible trains on one of the flying levels which is pretty frustrating when you are hitting a train you can’t even see! the perfornace of the game on the Xbox One X was perfect I never experienced any slowdown or frame-rate drops at all.

Spyro is a game for both old players and the new generation, It is a joy to watch my 7 year old play a game that I was playing as a kid and getting the enjoyment that I once did too, this time though with much more polish and beautiful visuals, even the way the grass embers up from Spyro’s fire attack is impressive and shows a real attention to detail! Something that is also worth a mention is the impressive voice acing, music and facial animations which are all really really strong! The sheer amount of work that’s gone into this remake is really impressive and in my opinion make the Trilogy great value for money.

While Spyro won’t suit everyone and some may not like the repetitiveness it can bring or how open the levels with a massive lack of guidance, I am pretty sure Spyro fans will be more than happy with this remake. Now it’s time to prey to the developers that they revive Spyro with a whole new game! You never ever know I guess but we can only hope….

After Crash Bandicoot we finally have Spyro back too and it has to be said it’s been worth the wait! Beautiful visuals, up to date and accurate controls as well as superb voice acting and music bring every bit of nostalgia back to a game that was once one of the best! Difficulty and a bit of repetitiveness can dampen the experience for some but most Spyro fans will I’m sure be happy with a really impressive remake! Having the three full games all in one package makes the game exceptional value for money in my opinion and one that I would recommend to new and old fans alike!