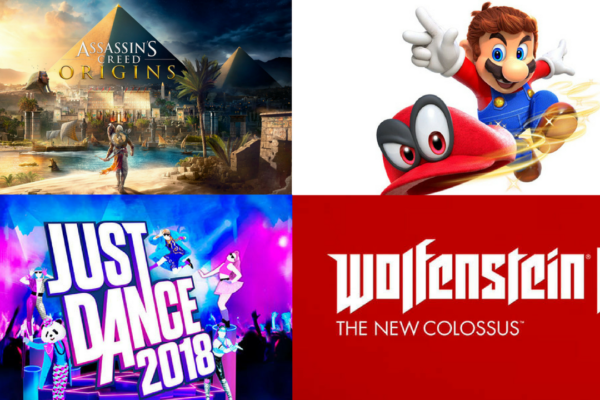 Are you ready for October 27th and it’s huge releases?

With Ubisoft, Nintendo and Bethesda all choosing to release games all on October 27th, gamer are in for a real treat with some of the biggest games of the year all coming in one day!

Destiny 2 will finally also be making it’s way to the PC on October 24th.

This years Assassins Creed looks to be making a huge comeback with some great new features as well as a beautifully crafted open world! Things look extremely promising and it is one game we are desperate to get our hands on come launch day!

To check out some of the features in this years latest Assassins Creed from Ubisoft click HERE as we run through all the stuff we know so far!

Blazkowicz is back and ready to restart the revolution! Bethesda’s highly anticipated title is only days away and from the trailers we have seen so far it looks like gamers are in for another gore filled treat! The visuals as you would expect from Bethesda look fantastic and the gameplay looks to be fast and frantic, another game we cannot wait to get playing come the 27th of October!

So Mario is finally making his way to the Nintendo Switch with his new friend and sidekick Cappy. Cappy gives Mario the ability to control enemies and objects as well as using Cappy in new and adventurous ways throughout to explore the world and save Princess Peach from marrying Bowser in his evil plot!

Just Dance 2018 is releasing again this month with this years latest version. Featuring 40 songs including the hugely successful Edd Sheeran Shape of you and Katy Perry Swish Swish there is surely something for everyone!

Check out the video below for what has already been some huge releases including Middle Earth: Shadow Of War, Forza Motorsport 7, South Park and GT Sport to name a few as well as PC gamers finally getting to experience Destiny 2 with it’s upcoming October 24th release!

Which games will you be buying this month? Comment below…